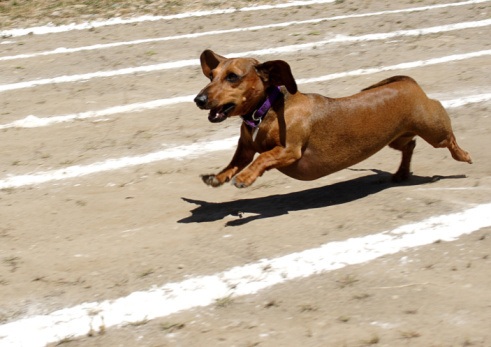 Port Authority Police at Newark Liberty International Airport were sent on a wild weiner-dog chase when a Dachshund escaped while he was being unloaded from the cargo hold yesterday evening.

Apparently little Henry, the Dachshund, had been cooped up long enough. Around 7:20pm last night, while being unloaded from Lufthansa flight 412, the spry pup escaped his crate and took off down the tarmac. Henry eluded Port Authority Police for close to an hour before they finally cornered him near a fence.

After cornering him, however, they were unable to capture the little dog. Officials removed Henry’s owner from the plane and brought her to wear they’d trapped the sneaky boy. As soon as he saw his human, Henry ran and leapt into her arms, trembling and most certainly happy to finally be safe.

Henry is doing fine and is safely back at home with his Mercer, New Jersey family – and have they got quite the story to tell!

While this story had a happy ending, this situation could easily have ended badly. If you choose to travel with your pets, especially in the cargo hold of a plane where they’ll be unattended and then handled by unknown persons, make sure they are secure in their crates! A 10-cent zip tie or tape across the edges of the crate door could have prevented Henry’s misadventures! (Locks requiring a combination or a key are not recommended, as they may prohibit accessing the dog in the event of an emergency.)

Aside from a little embarrassment, airport operations resumed as scheduled.