Yes, like us, our dogs can see in color. However, their perception of various colors is not exactly the same as it is for humans. As a matter of fact, dogs can’t distinguish between yellow, orange, red, or green. But, they can see a variety of shades of blue, and can even tell between very closely related tones of gray that are not normally discernible to people. To put it simply, dogs can see in color; only that the colors that our four-legged friends see are not rich as what you and I usually see.

The Reason Behind Your Dog’s Color Limitations:

Our eyes and those of our pooches generally consist of cones, or special light catching cells that respond to color. Because dogs have fewer cones as compared to humans, it suggests that their perception of color is not as vivid or as penetrating as ours. Nevertheless, the key to color vision is not only dependent on having these special lighting cells. Having many different kinds of cones, each set to different light wavelengths, is also vital to seeing color. We have three different types of cones, and the dynamics of these cells give us our rich, full-range, and intense color vision. Dogs, like many people with so called “color-blindness” have only 2 types of these cones.

Jay Neitz of the University of Carolina tried to test the color vision of canines. For several test trials, dogs were presented with three different light panels in a row; two of which come in the same color, while the third panel was different. The dogs’ objective was to look for the one that was not the same as the others and then to press that panel. If the dog subject was correct, he was then immediately rewarded with a treat that the workstation dispensed to the cup underneath that panel.

The researcher confirmed that pooches actually see color. However, its many fewer colors as compared to normal people do. To be more specific, instead of seeing the rainbow as ROYGBIV (red, orange, yellow, green, blue, indigo, and violet), dogs see a very dark gray, darker yellow (kind of brown, light yellow, gray, light blue, and dark blue. In other words, dogs only see the colors of the world as essentially gray, blue, and yellow.

How to Make it Easier For Your Dog: 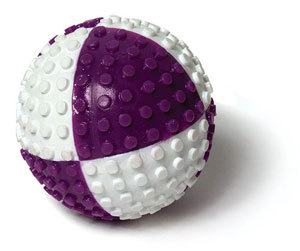 The VisionSmart ball for dogs is made with high contrasting white and dark purple color blocks, making it easier for dogs to see.

Oddly enough, many dog toy manufacturers don’t take this limited color vision into account when designing toys for dogs. For a dog, the bright red ball you’ve just tossed for them to fetch has essentially disappeared into the bright green grass – both colors which appear brownish or gray to your pup. Luckily, they can usually find it using their exceptional sense of smell. (Do you ever notice your dog finding toys with his nose instead of his eyes? That’s why!)

To make it a little easier on your pet to find the ball you’ve tossed for him, try to find toys specially colored for dogs’ limited color vision. Find a toy or ball with highly contrasting colors, like bright white and deep purple – colors seen most vividly to dogs, and you’ll see he has a much easier time finding it in the grass.